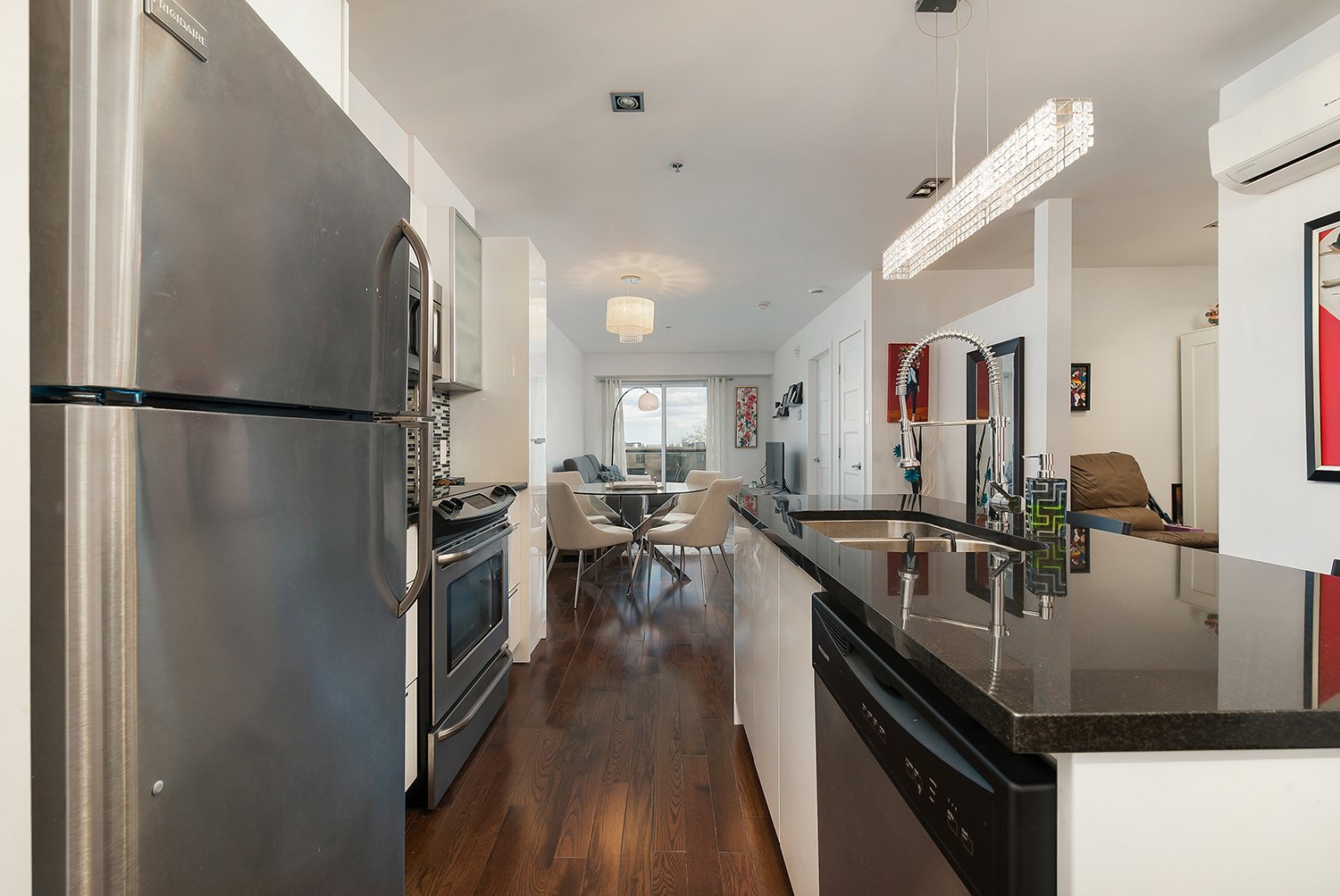 To put all these numbers in perspective you need to know the most important statistic of all which is in February, there were 22,252 active residential listings in the Montreal CMA, a 15 per cent drop
compared to one year earlier. This short supply of inventory creates a sense of urgency for buyers who must compete now compete to successfully attain their purchase. This is definitely a seller’s market, of course depending on the product, neighborhood and price point.

Read the full Qpreb report below:

“On February 8, the QFREB revealed the results of a survey that focused on buying and selling intentions in Québec’s real estate sector, carried out by the firm Léger. The survey was conducted among a sample of 6,931 Quebecers aged 18 and over, in partnership with the Association des professionnels de la construction et de l’habitation du Québec (APCHQ) and the Fonds immobilier de solidarité FTQ. Here are some of the interesting results from the survey.

According to The Economist, the survey shows that “35-49 year olds make up almost one third of first-time buyers. The 65+ age group is not just selling their single-familyhomes in preparation for retirement. In fact, people in thisage group are the most active buyers in the market. This means that many of these households are choosing to buy a condominium instead of renting, thereby acquiring an asset that will increase in value while benefiting financially from the sale of their single-family home.

About 2.4 per cent of Québec households bought a resale property last year. Thus, in terms of buying intentions, the survey results show much higher percentages. But as long as the economy and the job market remain healthy, the survey reveals that the demand for properties should remain firm in the future. As for the type of primary residence being sought, Chart 7 shows a clear preference for single-family homes, particularly among the younger cohorts. However, the popularity of condominiums grows considerably among the 55+ cohort. If, for argument’s sake, these were the only two types of properties in existence, the condominium market share would be twice as high for the 55+ cohort than for the 35-54 cohort. In terms of area, the survey revealed an unequivocal characteristic of buying intentions: the bigger a home is, the better! Households between 18 and 54 years of age have the firm intention of increasing the squarefootage of their home. The proportion of those who want a larger home stood at 71 per cent among 18-34 year olds, and 58 per cent among 35-54 year olds. In both of these age categories, only a small minority intend to reduce the size of their property. On the other hand, among the 55+ category, 56 per cent of respondents plan to buy a smaller home. The survey indicates that 41 per cent of those aged 55+ want to perform less maintenance and renovation work.

The survey reveals that homeowners have opted for greater peace of mind by signing primarily fixed-rate mortgage contracts, rather than variable-rate contracts. Among the 35-54 and 55+ cohorts, about 70 per cent chose a fixedrate mortgage. The cohort dominated by first-time buyers was even more cautious at 75 per cent.

In conclusion, The results of the Léger survey on buying and selling intentions in Québec draw a favourable picture of the residential resale market and suggest that the future remains promising.”

As for the rest of Canada, well that’s a different story

RBC just published their Monthly Housing Market Update Report. Here are some highlights from the report: 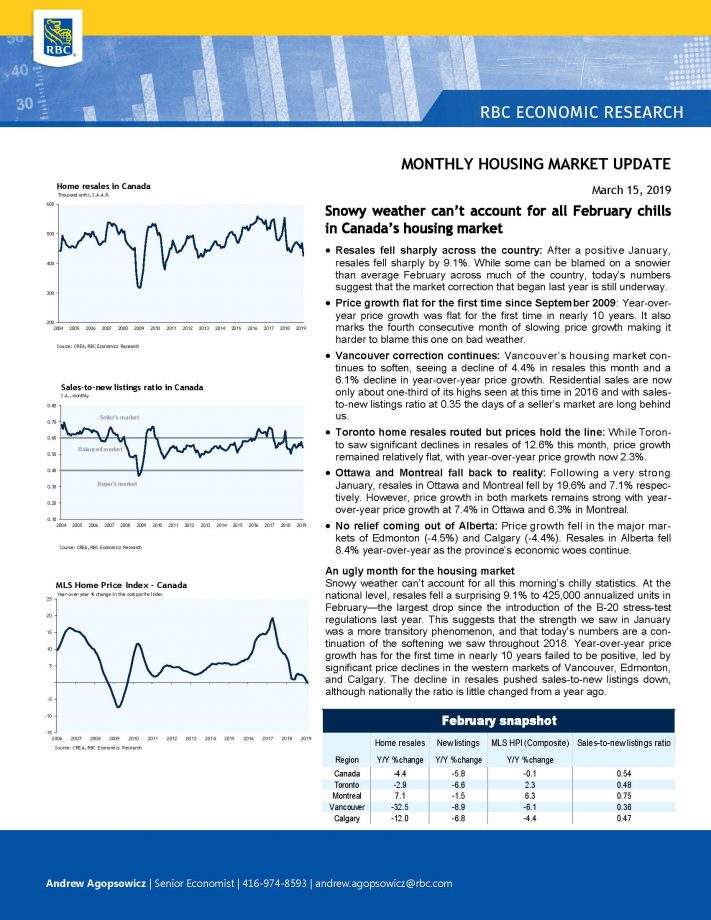 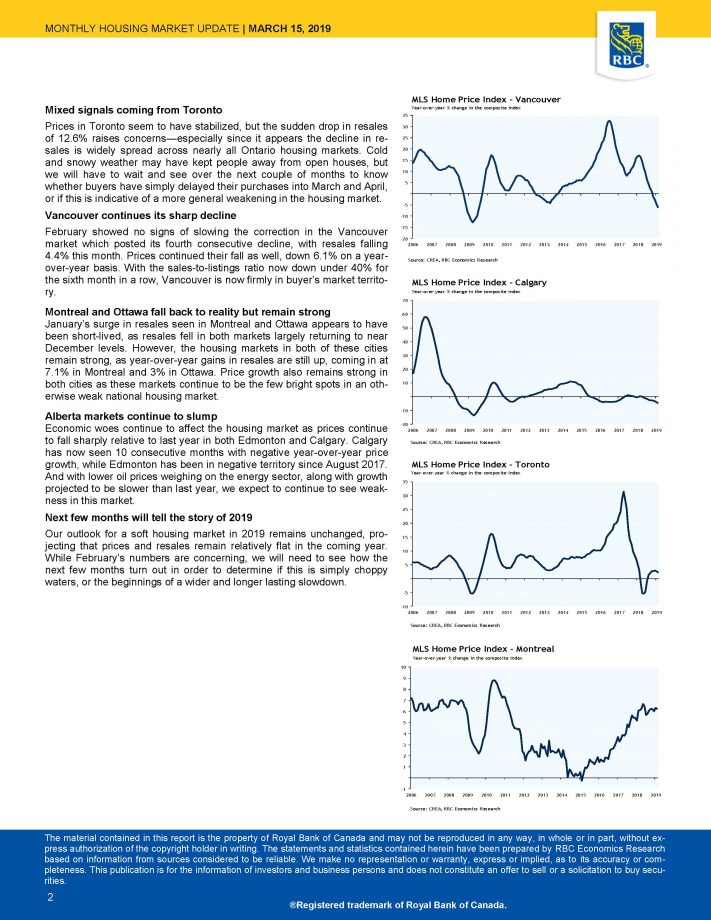